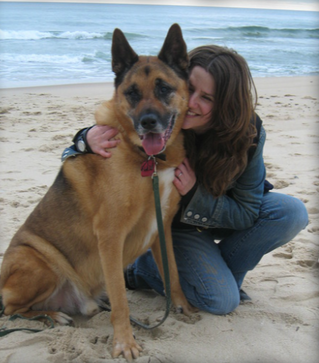 Renee Payne - owner
​
* Please note that as of March 2020, we no longer offer in-person sessions in the NYC area. We do still offer virtual training for basic obedience, service dog work, and behavior issues that do NOT include aggression. We have moved our home base to the Catskill Mountains.

Walk This Way provides positive-reinforcement based dog training and behavior modification throughout New York City. We use reward based methods first and primarily, but also understand that no two dogs are the same and there is no one "right" approach for everyone. To give each individual dog and owner what they need, we offer a balanced approach.

Walk This Way opened for business in 1999, and is owned and operated by Renee Payne, CPDT-KA. Renee graduated from the Animal Behavior Center of New York, is a member of the Association of Professional Dog Trainers, has been certified by the Certification Council for Professional Dog Trainers since their inception in 2001, and is a certified tester for the AKC's Canine Good Citizen Program. She has been interviewed as a behavior expert by CBS News, Fox News, The New York Times, CNN, MNN, The New York Post, GOOD, Modern Dog Magazine (more than once), Pet360, Esquire Magazine, Health Magazine, and various other media outlets. The therapy dog class she teaches for The Good Dog Foundation was featured by The Guardian, and the Brooklyn Dog Training Center's puppy party was featured on NBC's Today Show.

In the summer of 2015, Renee started work as an independent contractor with The Good Dog Foundation as the Executive Trainer for Manhattan and Brooklyn, evaluating, training, certifying and placing new therapy dog teams in facilities throughout the city. In May of 2017, she accepted the Director of Training position at the organization and currently oversees the class curriculum, class trainers, and juggles several other Good Dog hats.

Renee and her previous dog (Jimmy, pictured above) volunteered as a therapy dog team certified through Good Dog until Jimmy's retirement at the age of ten. Following in his footsteps, Renee's German Shepherd (Fonzie, pictured below) started his career in therapy dog work with Good Dog in 2017. In addition to doing regular therapy dog visits at their local hospital, Renee and Fonzie also work in Good Dog's Crisis Response Division, responding to natural or man-made disasters or crises. Renee developed curriculum for a class specifically for Crisis Response, which is open to select Good Dog therapy dog teams, and she teaches the weekend-long course.

Renee managed therapy dog teams for Good Dog and Pace University's Parenting, Prison & Pups program during their partnership, which ran from 2016-2020. She took her own dog and several other therapy dog teams to Metropolitan Correctional Center and Westchester County Jail during parenting classes.

In 2019, Good Dog became involved with the NYC Department of Education, and along with their Comfort Dog Administrator and Behavior Consultant, Renee created curriculum specifically for therapy dog teams that want to apply for the DOE's Comfort Dog program. She teaches those classes on an ongoing basis.

Renee evaluates the adoptability of dogs for local shelters and rescue groups, taught learning-abroad seminars and dog trainer-training programs to students from Japan for two years, is a mentor trainer for the Animal Behavior College and for CATCH Canine Trainers Academy, and ran her own dog trainer internship program from 2002 through 2017.

Renee designed a written and interactive interview process for co-op buildings to evaluate potential canine residents, and was interviewed about the evaluation process by The New York Times. She wrote several articles about dogs and kids for The Nick Jr. Channel's website, and has contributed articles to numerous other print and web-based outlets on topics ranging from training and behavior problems to breed traits.

Renee co-authored a children's book called Be A Dog's Best Friend with Jennifer Gladysz from Mobile Mutts about safe dog interactions, and conducted "How To Meet a Dog" seminars for young children throughout the NYC area. Walk This Way works with The Mayor's Alliance for NYC Animals  as well as Animal Care Centers of New York City to offer discount training to newly adopted NYC shelter dogs.

After doing extensive nose work with Jimmy, Renee started teaching nose work (Scent Games) to her clients. In 2014, she took the "for fun" nose work to the next level and began offering Medical Alert Service Dog training. She has trained Fonzie to alert her to an oncoming migraine.

When he's not alerting to migraines, going on therapy dog visits, or assisting Renee in classes as her demo dog, Fonzie works as an actor. He has been in photo shoots as well as appearing in a few TV shows and movies.

In her spare time, Renee wrote a memoir that surely embarrasses her entire family. She currently shares her home and her furniture with Fonzie and Fonzie's cat, Louise (Weezy). 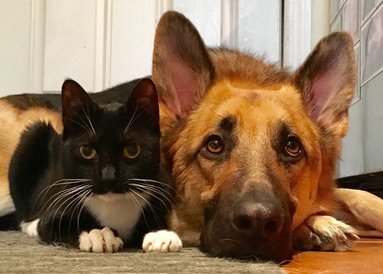